How to deal with snow on your roof?

Snow is a very beautiful winter asset. It gives you that special feeling of the utmost serenity. Of course that only works in cases where you don’t have to go pretty much anywhere, and when your roof can handle it.

Every snowfall, you have to grab a shovel, or a similar tool you’ve decided to harass and clean that excessive amount of snow from your roof in fear of it collapsing.

Fortunately, it doesn’t work that way. By following the universal building code, your roof is made to endure all hardships of your area and even more. So there isn’t much of a chance of it collapsing on top of your head while you’re sleeping, but that still doesn’t mean you shouldn’t keep the snow off.

Although one would think you would get accustomed to snow in a certain while, especially if you find yourself living in a naturally cold area, the truth is quite the opposite. It is always a tiresome task.

It is absolutely tiresome, and it is absolutely necessary. The accumulation of a huge amount of snow can lead to leaking problems, insulation problems and much much more.

One of the best examples of just how fearsome snow is, are ice dams. An ice dam is a mass formed when accumulated snow starts to melt, and new layers of snow are formed upon that melting layer.

In case you have a roof with a steep slope, you can easily recognize this all thanks to gravity. The melting snow, flows down the roof creating icicles you like to chop off. The additional, fresh layers of snow that are formed upon the melting layer are providing the perfect insulation to keep this process alive.

The frequent appearance of ice dams can significantly shorten your roofs life expectancy and thus lead to more unnecessary expenses.

Another problem a homeowner has to face is leaking. Leaking itself can be caused by a variety of things, one of it being snow melting in the spring, to prevent such mishaps from happening, further down are some helpful tips on how to get rid of that annoying snow. 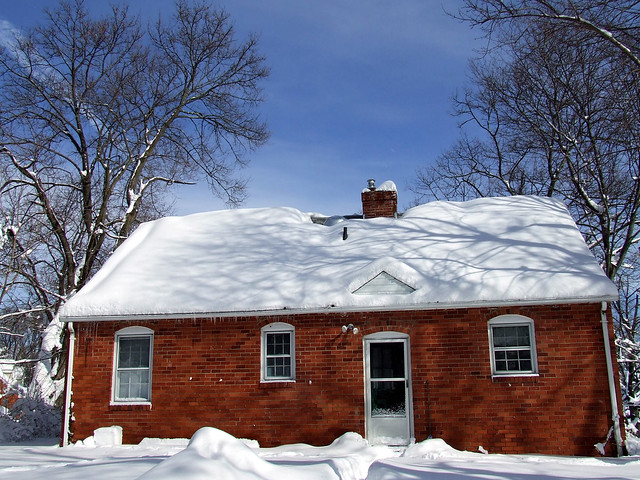 How to effectively remove snow from your roof?

Although humans are usually visual creatures, a large amount of snow can act as a trigger for you to hastily remove it. Generally speaking, it is good to keep that fear in the back of your head, but you should also learn that the weight of the snow does the trick.

To check how much snow is too much, go to your upper-floor doors and check if they stick. In case they do, that means that there is a large mass pressuring the centerpiece of your house. While checking to see if the doors stick, you could also check the door frames and any areas surrounding the door for dark spots or any visible cracks.

In case you want to bother yourself with the cleaning process, you could always obtain a snow rake from your nearest hardware store. The most popular ones are the rakes that go between the snow and the roof, allowing for gravity to take its course. Of course, try and collapse it somewhere that isn’t your head.

Fortunately, there are a lot of professional snow contractors these days, so you should probably leave it all to them. Before allowing a stranger to clean your roof, check their license and insurance to ensure premium quality, even in such a small task. If you need any further information regarding how to clean your roof, don’t hesitate to call your most trusted roofing contractor from Atlanta, The Cool Roofing Company, No. 1 commercial roofing in Atlanta.

What you can read next

Should you install wood shakes?